Santa left me the best stocking stuffer ever this year. It’s called the Dancing Ball Ground Bouncer reactive target made by Do All Outdoors. It’s pretty simple. It’s just a four-inch round chunk of Impact-Seal rubber, put together in a way that makes it shaped like a ball, but with open, hollow areas all the way around it. That gives it more surfaces that aren’t completely round, so when you hit it with a shot, it jumps away in unpredictable directions. 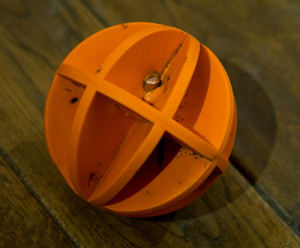 Do All Outdoors makes this reactive target. This one has taken roughly 50 hits from a .45 and 20 from a .22, and it’s still going strong.

The Impact Seal rubber allows it to be used and reused a bunch of times. Do All Outdoors says it’ll handle more than 1,000 shots. I’m sure that depends on the caliber you’re hitting it with, and they say it’s rated for all calibers from .22 all the way up to .50.

I’m not sure how it would hold up to a .50 BMG, but it does great with my .45. I took it out back on Christmas morning and plugged it with about 12 full magazines from my 1911. I’ve tossed it out in the pasture a few more times since then and unloaded a couple of mags at it, and it still looks like a ball. There are now a few .45 slugs stuck in the center section, but it’s actually pretty hard to tell where it’s been hit, otherwise.

This is a great target, because it’s reusable, and it’s fun. The fact that it’s reusable means I don’t have to go get a new one every time I want to shoot, and since it’s fun to shoot at, I’m more likely to actually go outside and practice with my firearms.

Do All Outdoors makes other shapes, too, if the ball isn’t your thing. They have gongs, bowling pins, top hats, squares, and jacks, if you think you’re really good, just to name a few. Get yourself one, and go get some practice.