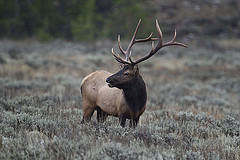 Fifty-three elk that were recently captured as part of an ongoing study to understand the ecology of brucellosis and elk in the Bighorn Mountains have tested negative for brucellosis.

In mid-February, 53 elk were captured over three days using a helicopter net-gunning operation in the northern and southern Bighorn Mountains and on the lower Greybull River.

Blood samples were obtained from each captured elk and sent to the Game and Fish Wildlife Health Laboratory in Laramie to be tested. “All elk tested negative for brucellosis on serological tests,” said Wildlife Division Chief Brian Nesvik.

“The department is committed to better understand how widespread brucellosis is in the Bighorn Mountains. The movement study and hunter harvest information allows us to provide better information, relating to brucellosis in elk, to the livestock producers in the area. It was good news that none of the captured elk tested positive, but the most valuable information will come from the wider study about the movement of these elk and overall prevalence rates,” Nesvik added.

Brucellosis, a disease caused by the bacteria Brucella abortus that causes elk to abort, is known to be widespread and common in elk in the Greater Yellowstone area. Elk and bison are the primary reservoirs of the disease. Brucellosis can be spread from elk to other elk and to livestock.

Since 2012, Game and Fish has documented nine seropositive elk along the western flank of the Bighorn Mountains through testing hunter-harvested elk. Seropositive test results indicate an individual elk has been exposed to the bacteria, but may or may not be infected with the disease.

To help biologists understand seasonal movement patterns of elk in the Bighorn Mountains, elk captured as part of this study are also fitted with GPS radio collars. Currently, there are 73 collars actively transmitting locations as a part of this study. Collars deployed this year collect eight locations per day, which will also help Game and Fish develop more precise models to understand brucellosis prevalence in elk and potential risk of transmission to livestock, as well as resource selection of elk. Game and Fish plans to deploy up to six more collars in mid-March.