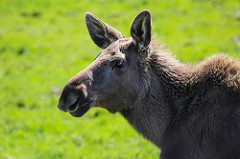 MOOSE, Wyo.— Rangers and state wildlife officials are investigating after a moose was illegally killed in Grand Teton National Park.

The National Park Service says state game wardens were called over the weekend by a participant of the park’s elk reduction program who reported a calf moose was mistakenly shot. The Wyoming Game and Fish Department cited the person for killing the moose without a license.

Rangers say they are intensively monitoring and patrolling elk reduction areas within the park.

The meat from the calf moose killed over the weekend was donated to needy families.