While I had the Power Wagon to drive last week, I was looking for any excuse to take it out and get it dirty. At the same time, I just plain needed to get out to the hills. I’ve been cooped up in the home office way too much lately. 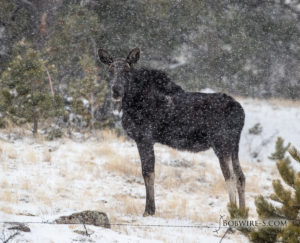 This cow moose was one of three of her kind who made my escape from the confines of my home office a success. Photo by Ty Stockton

Unfortunately, there seemed to be a winter storm raging up in the Pole Mountain area of the Medicine Bow National Forest. I didn’t know that when I left town. The snow got the wildlife moving, though, and I didn’t have to go far before I found two cow moose and a calf strolling down the highway. I was able to snap a few shots of the moose before they faded into the fog, and then I got some photos of some magpies. I had barely started my trip, and it was already turning out to be just what I needed.

Because of the snow, almost all the roads off the highway into the forest were closed. There was only one I could find that was open, so I threw the truck in four-high and turned in. I only made it a few hundred yards before the snow was too deep to get through, so I turned around and headed back toward the highway.

Before I got back to the road, a red blur appeared to my left and shot across the path ahead of me. As it reappeared on the passenger side of the truck, I realized it was a beautiful red fox, with an incredibly thick winter coat. It was gone way too quickly to get my camera up, but that sight is etched in my memory.

And that gives me a good idea for an excuse to get outside this coming weekend. I think I’ll grab both the varmint rifle and the camera, as well as the cottontail in distress call, and head back out to the forest again. I don’t know if I’ll get pelts or pictures, but I don’t really have to get either. All I really need is to get outside in the snow and fresh air for a few hours.

With any luck, I’ll see those moose again, too.