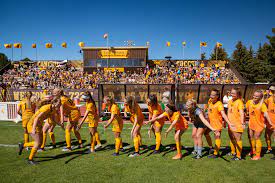 The University of Wyoming soccer team experienced an unceremonious conclusion to its first road trip of the season. The Cowgirls fell to St. Thomas 3-0 on Tuesday at South Field.

“We didn’t set the tone or set the tempo early, and that was something I was hoping we’d do,” head coach Colleen Corbin said. “We have to find a way to be the same team on the road that we are at home, and to me, it’s more of a mentality thing than a soccer thing.”

A relatively tepid first half ended with St. Thomas netting a goal in the waning moments. Maddie Bomsta scored in the 45th minute, staking the Tommies to a halftime advantage.

Wyoming managed three shots in the opening 45 minutes and made a concerted effort to up that total in the second half. Eight shots were fired during the final 45 minutes, as the Cowgirls made a push to level the score.

However, St. Thomas added to its advantage on a couple different occasions. Jasmine Gates scored in the 58th minute to make it 2-0, and Kristen Epperly gave the game its final tally with a goal in the 81st minute.

Freshman forward Maddi Chance paced Wyoming with a trio of shots, all of which were on frame. Redshirt-junior midfielder Jamie Tatum added a pair of shots, while six other players – three who came off the bench – logged a shot.

Wyoming returns home for its second-to-last non-conference match. The Cowgirls host Idaho State on Friday at 4 p.m. at the Madrid Sports Complex.