I know I need to get better about identifying birds, especially raptors. There are a bunch of hawks that come in a variety of different colors and patterns, and a lot of those appearances look a lot like other species. 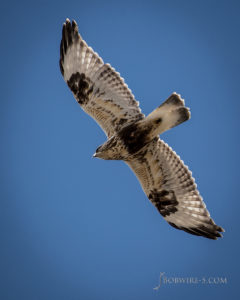 I originally misidentified this as a Swainson’s hawk, but my helpful Facebook friends were quick to point out that I was wrong, wrong, wrong. Turns out it’s a rough-legged hawk, instead. Photo by Ty Stockton

It wouldn’t be that important, except that I sometimes post photos I’ve taken of birds on Facebook, and I look like an idiot if I misidentify them. That happened just last week. I posted a picture of what I thought was a Swainson’s hawk, and I included that name in the post. Again, that wouldn’t be a big problem if I didn’t have a ton of Facebook friends who are bird biologists and birdwatchers.

With the photography, it’s sometimes important to get the bird species right. There are times when I need to send a photo of a specific type of bird to a magazine, and I need to make sure I send the right one.

I’ve decided I’d rather look like an idiot on Facebook than in front of a magazine editor. So now, when I get good pictures of birds, I immediately post them on Facebook and just ask for help.

I think it’s helped me with my bird ID skills, but there are still times when I’m not sure what I’m looking at. As long as I have a photo that shows plenty of the bird’s features, though, I usually get an answer pretty quick.

I’ve learned there are a lot more types of hawks in my area, too. For a long time, I thought all we had were Swainson’s hawks, but it turns out we also have a bunch of rough-leggeds, ferrouginous hawks, and more.

I’ll keep shooting and posting, and maybe someday, I’ll be able to tell the difference on my own.