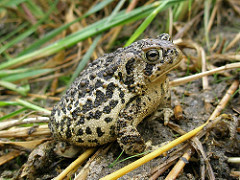 The fungal disease, called chytridiomycosis (chytrid), can result in very rapid population declines and tends to disproportionately affect species that are rare and unique like the Wyoming toad. In response to this and other threats facing the Wyoming toad, the U.S. Fish and Wildlife Service (Service) announced today it is making available a final recovery plan for the species. The Service developed the plan in conjunction with the Wyoming Game and Fish Department.

“This plan lays out a roadmap for saving one of America’s most imperiled amphibians,” said Tyler Abbott, who leads Wyoming toad recovery efforts for the Service. “In recent years, we have gained valuable insight into the threats facing the species as well as new techniques and technologies for addressing those threats. Our ultimate goal with this plan, which we will implement collaboratively with our partners, is to recover the Wyoming toad and return the species to state management.”
Listed as endangered in 1984, the Wyoming toad is considered one of the four most endangered amphibian species in North America and is currently classified as “extinct in the wild” by the International Union for Conservation of Nature. Approximately 500 individuals are currently held in captivity for breeding and reintroduction efforts.

Once abundant on Wyoming’s Laramie Plains, the species experienced an unexplained population crash in the middle 1970s, which scientists suspect may be attributable to chytrid. Other threats continue to hamper recovery efforts, including a lack of suitable reintroduction sites and a small population size. The Final Recovery Plan is designed to address these threats, with the end goal of creating self-sustaining populations that no longer require Endangered Species Act (ESA) protection. This final plan followed a Draft Revised Recovery Plan, which was released in February 2014 and underwent a thorough public review process.

“Wyoming has made a strong commitment to recovering this species and we are glad to be a part of this plan further restoring the Wyoming toad,” said Mark Fowden, Chief of the Wyoming Game and Fish Department’s Fish Division.

To be considered for ESA delisting, wildlife managers will need to establish a minimum of five self-sustaining populations within the toad’s historic range that persist for at least seven years. The recovery plan also requires the creation of an adaptive management plan to guide conservation of captive and wild populations for 25 years after delisting. This adaptive management plan will include detailed monitoring protocols to ensure populations do not decline below recovery criteria. Finally, the adaptive management plan must address both known threats and those that may arise in the future.
The Final Revised Recovery Plan can be viewed at: http://www.fws.gov/mountain-prairie/species/amphibians/wyomingtoad/.

Recovery of endangered or threatened species is the primary goal of the Service’s endangered species program. To help guide recovery efforts, the Service and state partners like the Wyoming Game and Fish Department prepare recovery plans for federally listed species that describe actions necessary for the conservation of the species and establish objective, measurable recovery criteria. When met, these criteria would result in a determination that the species no longer needs the protection of the ESA. Recovery plans must also provide estimates of the time and cost for implementing the needed recovery measures.