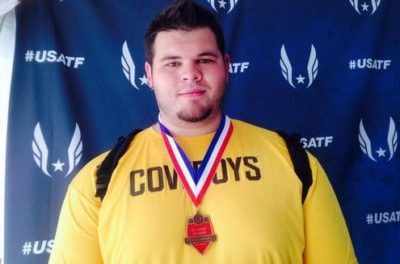 Former University of Wyoming All-American Mason Finley began the U.S. Olympic Trials on Thursday exactly the way he had hoped, finishing first in the qualifying round of the men’s discus competition with a career best throw of 218’ 11” or 66.72 meters.  His previous career best was 65.73 meters, which he threw in June of this year.  Finley advances to the men’s discus final on Friday.  A total of 12 throwers out of an original field of 24 competitors advanced to the finals which will take place at 4:30 p.m., M.T., Friday from Eugene, Ore.  The discus finals are scheduled to be televised on NBC Sports Network (NBCSN) as part of the network’s coverage from 4-6 p.m., M.T., on Friday.

Finley’s throw came on his second attempt of the day and exceeded his next closest competitor by nine feet.  Sam Mattis of the University of Pennsylvania threw 199’ 11” to finish second in the qualifying round.  Finley’s throw of 66.72 meters surpassed the automatic qualifying standard of 65 meters and allowed him to forego his final throw in the prelims.

“Tonight showed how prepared Mason (Finley) was heading into the Olympic Trials,” said UW associate head coach and throws coach Paul Barrett.  “For him to throw a great PR (personal record) in a competition of this caliber is extremely impressive.  Some times the prelims are more stressful than the finals.  He is about six and a half feet off the Olympic Trials record of 225’ 4” set by Mac Wilkins at the Trials in 1980 — also at Oregon.  Wilkins was the 1976 Olympic Champion and was a former world record holder.  That shows just what an amazing throw that was by Mason today. We hope he can continue that performance tomorrow in the finals.”

On Friday, Finley will be vying to be one of the three individuals in the men’s discus competition to earn a spot on the U.S. Olympic team that will compete in Rio de Janeiro, Brazil, Aug. 5-21.

The native of Buena Vista, Colo., won the 2014 Mountain West Conference individual title in the discus back on May 16, 2014, when he recorded a throw of 202’ 11” for the second-best mark in MW Championship history.  Finley was named the Outstanding Male Athlete at the 2014 Mountain West Outdoor Track and Field Championships.  He went on to place sixth in the discus at the 2014 NCAA Outdoor Track & Field Championships at Hayward Field at the University of Oregon to claim the 11th All-America honor of his college career.  He began his college career at the University of Kansas where he has been training most recently.