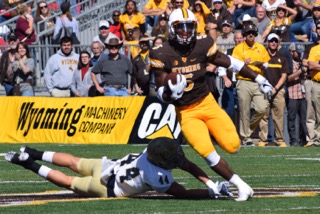 Junior running back Brian Hill rushed for a career-high 289 yards, leading the Pokes to a 42-34 win over Nevada on Saturday evening in Mackay Stadium in Reno, Nev. With the win the Cowboys move to 5-2 overall and 3-0 in Mountain West. It is the best start in conference play for the Pokes since moving to the conference.

“Coming in we knew it would be hard fought game because they play so well at home,” UW head coach Craig Bohl said. “We were very physical and were really able to run the football.”

Hill had seven rushes over 15 yards on the night and added a career-high three touchdowns. It was the highest rushing total in the MW this season and the second most in school history. He now owns four of the top-10 single-game rushing outputs in school history.

“Brian was phenomenal tonight and really fought hard,” Bohl said. “It was a great win and we are excited. These are the type of wins that build a program.”

Redshirt sophomore quarterback Josh Allen threw for 135 yards on 8-of-12 passing. He also rushed for 52 yards with two touchdowns and one receiving touchdown. Senior wide receiver Tanner Gentry had four grabs for 109 yards. He has 2,101 career receiving yards ranking eighth in school history.

Sophomore free safety Andrew Wingard recorded 11 tackles on the night. He has double-digit tackles in 12 career games. Redshirt freshman Logan Wilson added nine tackles tying a career high. He added a sack and an interception to seal the game for the Pokes. Sophomore Antonio Hull had a career-high 10 tackles for the Wyoming.

Hill was on fire in the opening quarter running for 97 yards. On his first touch of the contest, he sprinted past the Wolf Pack defenders for a 41-yard gain. He would later put the Pokes on the board first on a 56-yard rush to make it 7-0.

Nevada scored their first points of the contest with a 45-yard field goal by Spencer Pettit to open the second quarter.

The Pokes responded with a nine play, 94-yard drive that ended in a two-yard Hill touchdown run to extend the UW lead to 14-3 with10:10 left in the first half. It was the second longest touchdown drive of the season for the Cowboys.

The Wolf Pack cut into the Pokes lead 14-10 in the second quarter off a 17-yard touchdown by backup quarterback Ty Gangi. Nevada used 10-plays covering 75 yards on the drive.

Wyoming responded yet again on a one-yard touchdown run by Allen. The Pokes drive lasted 5:24 with 13 plays covering 75 yards all of which came from the ground. Nevada ended the half with a 44 yard field goal by Pettit to make it 21-13 in favor of the Pokes at halftime.

The Pokes drove down on a 13 play, 75 yard drive that took 6:16 to open the second half. The drive was finished by a reverse wide receiver pass from Austin Conway to Allen to make it 28-13 in favor of the Pokes. It was the first touchdown pass not thrown by a quarterback since Chris McNeil (WR) threw a touchdown pass against Toledo on Sept. 8, 2012.

Nevada added a touchdown of their own on a nine yard run by James Butler to cut the UW lead to 28-20. It was the longest run of the night for Butler to that point. Hill responded with a 20-yard touchdown to expand the Wyoming lead to 35-20 with 4:14 left in the third quarter.

The Wolf Pack took momentum late in the third quarter cutting the lead to 35-27 on a 27 yard touchdown pass from Gangi to Jarred Gipson to make it 35-27. Nevada attempted to cut into the lead again in the fourth quarter, but the UW defense held the Wolf Pack after a missed field goal.

Allen added another touchdown that was followed by a score by Nevada to make the contest 42-34. The Wolf Pack got the on-side kick, but Wilson sealed the game with an interception.

Wyoming returns to action next week hosting No. 14 Boise State in War Memorial Stadium. Kickoff is slated for 5 p.m.