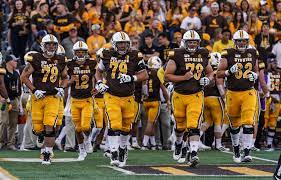 Wyoming Cowboy head football coach Craig Bohl felt that the offensive line played one of their best games of the year last Saturday in a loss at San Jose State. The Pokes ran for around 250 yards against the Spartans. They’ll need to have a similar effort against a talented Colorado State defensive line. The Rams took the run away last year by stacking the box against the Pokes. Wyoming offensive lineman Frank Crum expects they’ll do the same thing on Saturday.

“They have a really solid defensive line that we saw last year, and those guys are coming back. I think you’ve got to account for all those guys in the box. Last year, they packed the box on us, so it could be another heavy box week for us. We’ll look at the film from last week, and learn from that.”