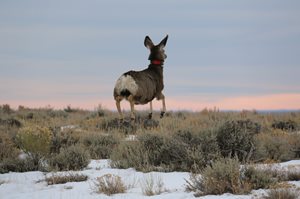 JACKSON, Wyo. (AP) – A committee charged with shaping Wyoming’s policies for safeguarding wildlife migration is asking Gov. Mark Gordon for an executive order that will keep designated routes largely unscathed.
The Jackson Hole News & Guide reports that the eight-person group, which was chosen by Gordon, met for the last time Tuesday in Pinedale and agreed unanimously to ask for an order.
The exact language of the order and whether Gordon agrees to do it is uncertain. But its essence would be to keep migration routes functional and healthy.
The committee includes representatives of oil and gas, agriculture, mining, hunters, the Wyoming Game and Fish Commission, conservation and counties.
The policy that emerges from the advisory group’s recommendations will eventually replace the Wyoming Game and Fish Department’s interim migration strategy.