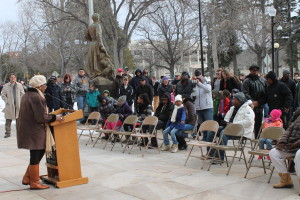 Hundreds of Cheyenne residents marched up Capitol Avenue from the Cheyenne Depot Plaza to the steps of the state capitol to honor Rev. Dr. Martin Luther King Jr. today.  It was the 34th annual march to celebrate the life and commemorate the legacy of Dr. King.

Rita Watson is a member of the Loving Charity Club, who has sponsored the march every year.  Watson says there are a number of problems that deal with race and race relations in the world today, but with some open dialog, a lot of those problems could be solved….

Watson adds that if Dr. King were alive today he would be disappointed more progress hasn’t been made in race relations and opportunities……..