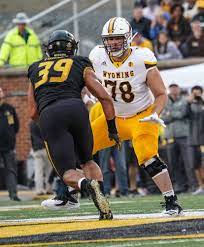 The Wyoming Cowboy offensive line is supposed to be a strength of this team, but they haven’t played like it at times this year. The Wyoming front five is experienced and talented, but they’ve been hit and miss this season. At times, they’ve been dominant, pushing defenses around two weeks in a row at Northern Illinois and at home for Ball State. But against Montana State, UCONN and Air Force, they were unable to get a consistent push for the talented Wyoming running backs. Senior offensive lineman Alonzo Velasquez says he likes their focus and intensity, but they’ve got to be able to hold their blocks a little bit longer.

“I thought our mental process, and what we were doing out there technique-wise and scheme-wise, was good, or on-par. I think the biggest thing I learned, especially for me, is just staying on blocks longer.” Velasquez added, “We’re on the right people, but we just need to stay on the people longer. I just think that was the big difference for that game (Air Force) that we need to work on.”

The Wyoming Cowboys are back in action this weekend, when they host Fresno State. That kickoff is set for 1:30 pm at War Memorial Stadium.