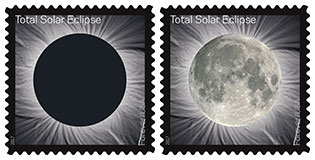 The U.S. Postal Service has chosen the University of Wyoming as the site to launch a first-of-its-kind stamp that changes when you touch it. The stamp will show a total solar eclipse that transforms into an image of the moon from the heat of a finger.

The Total Solar Eclipse Forever stamp will be issued June 20, the day before the summer solstice, the longest day of the year. The stamp will commemorate the total solar eclipse that will occur Aug. 21, when tens of millions of people in the United States — including Wyoming — hope to view a total eclipse of the sun.

The 1:30 p.m. First-Day-of-Issue ceremony will take place at the UW Art Museum in conjunction with is annual summer solstice celebration. Visitors are encouraged to arrive at 11:30 a.m. to watch a beam of sunlight move across the floor, hitting an embedded silver dollar in the center of the Rotunda Gallery at noon, and to look at the sun through special telescopes.

“We are delighted that the Postal Service has selected the University of Wyoming Art Museum for the launch of this very special, new stamp,” Art Museum Director Susan Moldenhauer says. “It will be an event to celebrate and learn about the sun and kick off the festivities for the summer of the eclipse in Wyoming.”

The stamp image is a photograph taken by astrophysicist Fred Espenak, aka “Mr. Eclipse,” of Portal, Ariz., that shows a total solar eclipse seen from Jalu, Libya, on March 29, 2006. Art director Antonio Alcalá, of Alexandria, Va., designed the stamp.

In the first U.S. stamp application of thermochromic ink, the solar eclipse stamp will reveal a second image. Using the body heat of your thumb or fingers and rubbing the eclipse image will reveal an underlying image of the moon. Espenak also took the photograph of the full moon. The image reverts back to the eclipse once it cools.

A total eclipse of the sun occurs when the moon completely blocks the visible solar disk from view, casting a shadow on Earth. The 70-mile-wide shadow path of the eclipse, known as the “path of totality,” will traverse the country diagonally, appearing first in Oregon (mid-morning local time) and exiting some 2,500 miles east and 90 minutes later off the coast of South Carolina (mid-afternoon local time).

The eclipse will hit the Cowboy State starting at about 11:30 a.m. Aug. 21, starting in Jackson and Grand Teton National Park. The shadow will then cross Pavillion (at 11:38 a.m.), and Shoshoni and Riverton (at 11:39 a.m.) for about 2:23 before landing squarely on the city of Casper. The centerline will pass right over the intersection of Highway 220 and South Poplar Street in Casper at 11:42 a.m., and provide viewers there with 2:26 in totality. Douglas, Glendo, Thermopolis, Lusk and Torrington are other larger Wyoming towns that will experience a total eclipse.

A total solar eclipse provides the only chance to see the sun’s corona — its extended outer atmosphere — without specialized instruments. During the total phase of an eclipse, the corona appears as a gossamer white halo around the black disk of the moon, resembling the petals of a flower reaching out into space.

The Total Solar Eclipse stamp is being issued as a Forever stamp, which is always equal in value to the current First-Class Mail 1-ounce price. The back of the stamp pane provides a map of the Aug. 21 eclipse path and times it may appear in some locations.

Read more about the eclipse