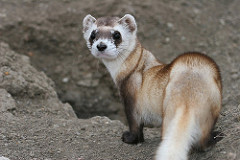 DENVER — Black-footed ferrets are being released on the Rocky Mountain Arsenal National Wildlife Refuge, a milestone for both the highly endangered animals and the former Superfund site on Denver’s industrial edge.

The U.S. Fish and Wildlife Service plans to turn 30 ferrets loose there Monday.

Black-footed ferrets were once thought to be extinct, but a small colony was discovered in 1981 in northwestern Wyoming. Researchers have been trying to restore the population to health since then.

Officials estimate about 300 now live in the wild from Canada to Mexico.

Ferrets are long and slender, with an appealing face and an appetite for prairie dogs.

The Rocky Mountain Arsenal was once a forbidding site where chemical weapons and pesticides were manufactured. It became a refuge in 2010 after a $2.1 billion cleanup.