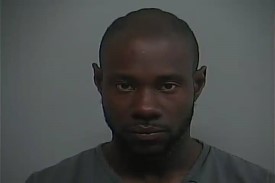 According to Chief Pacheco:

UPDATE as of May 11th: The victim has been identified as Toboris Lee, 20 of Batesville Mississippi.

If you were a witness to or have information regarding the death of Toboris Lee, please contact either Officer Chick or Detective Hall at 307-352-1588.

***
At around 9:30 p.m. on May 9th, 2016 Officers of the Rock Springs Police Department and Deputies of the Sweetwater County Sheriff’s Office responded to a report of a disturbance at the Loaf and Jug Convenience Store at 2558 Foothill Blvd in Rock Springs.

Initial officers arrived within minutes of the report and determined one male had suffered multiple stab wounds as the result of a disturbance in the parking lot. The subject later succumbed to his injuries at Memorial Hospital of Sweetwater County.

Carter was arrested for Murder in the First Degree and incarcerated at the Sweetwater County Detention Facility. Bond was not available at the time of this media release. The identity of the victim is being withheld pending family notifications.

If you were a witness to or have information regarding this incident, please contact Detective Hall at 307-352-1588.

All persons are innocent until proven guilty.