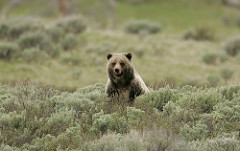 The U.S. Fish and Wildlife Service is bracing for legal challenges as it prepares to remove the Yellowstone grizzly bear from the endangered species list.

Officials say almost every controversial action the agency takes is litigated. In 2007, the agency tried to delist the grizzly but was stopped by a lawsuit from environmental groups.

Officials have been gathering public response to a new plan to remove the grizzly’s protections by the end of 2016.

Representatives from other federal, state and tribal agencies raised several concerns about delisting the grizzly, including the fear that it could further endanger the animal. But others back officials’ plan.

The Fish and Wildlife Service says it has data to support the species’ recovery and argues that it has met the criteria for delisting.