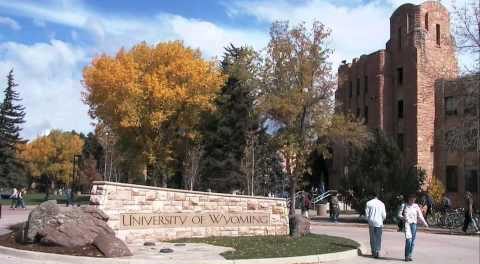 The University of Wyoming Board of Trustees will interview three candidates for the office of acting president of the university during an executive session Wednesday, May 15.

The interviews will take place starting at 7:30 a.m. Wednesday during the board’s regular meeting at the Marian H. Rochelle Gateway Center. The interviews will be in executive session under Wyoming Statute 16-4-405(a)(ii), to consider the appointment of a public employee.

Representatives of UW’s Faculty Senate and Staff Senate will be invited to attend the interviews.

“We are delighted to have three very strong candidates willing to serve the state and the university in this important leadership role at a key time in UW’s history,” Board of Trustees Chairman Dave True says. “Our intent is to select an acting president who will, among other things, maintain the positive momentum of the university and lay the groundwork for a long-term president.”

Although the interviews of the candidates will not be open to the public, the board will accept public input on the selection. Those with comments on the candidates are asked to submit them by going online here by 5 p.m. Tuesday, May 14.

More information about each of the candidates may be found here, here and here.

Following the interviews, the board is scheduled to deliberate in executive session Wednesday morning — and Friday morning, if necessary. Selection of the acting president would take place in a public vote during a subsequent special meeting of the board.

The UW Board of Trustees has not discussed details of the search for a long-term president, but members have expressed support for an open, transparent search process that involves stakeholders across UW’s constituencies, including Wyoming citizens. Details will be discussed in future open meetings of the board.