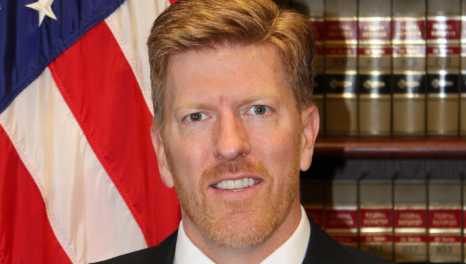 Chief Federal District Court Judge Scott W. Skavdahl sentenced ARNOLD DEVONNE BUTLER, 54, today in Casper. Butler was convicted on January 17, 2020 after a 4-day jury trial and found guilty on all counts, including possession with intent to distribute and conspiracy to distribute methamphetamine, heroin, cocaine, and fentanyl. Butler received two hundred forty months of imprisonment, to be followed by one hundred twenty months of supervised release, and was ordered to pay a $500.00 special assessment.

Butler was initially stopped for a commercial vehicle inspection by the Wyoming Highway Patrol on Interstate 80 in Laramie County on May 15, 2019. He was driving a rollback style commercial tow truck and transporting a sedan. During the inspection, the Trooper became suspicious of Butler’s activities and called for a drug detection dog. The dog alerted on the towed vehicle and officers found 46 pounds of methamphetamine, two and a half kilograms of cocaine, a kilogram of synthetic fentanyl, and three kilograms of heroin hidden in a compartment built between the rear seat and trunk of the vehicle.

Further investigation of this case following Butler’s arrest led agents to uncover connections with other drug trafficking activity outside Wyoming. “The Butler investigation has been and continues to be a multi-agency, multi-jurisdictional investigation that identified, disrupted and dismantled a drug trafficking organization that has been responsible for the importation and distribution of hundreds of pounds of illegal narcotics across the United States.”, stated DEA Resident Agent in Charge, David A. Tyree. “The outstanding investigative efforts from the Wyoming Highway
Patrol and the Wyoming Division of Criminal Investigation, working with the DEA and FBI in Wyoming and California developed a highway interdiction of illegal drugs into an investigation that resulted in several arrests and additional drug seizures in California and elsewhere.”

“While I am gratified with the result and commend the great detection and investigative effort of our Troopers and agents, we know that Mr. Butler is just the tip of the iceberg. Every day across Wyoming and elsewhere, drug couriers like Mr. Butler are using our highways to move these dangerous substances across the country and into our communities,” said US Attorney Mark Klaassen. “We will continue to do what we can as law enforcement to identify and stop these criminals, but our communities must also work to find ways to reduce demand and address the addiction that drives this criminal activity.”