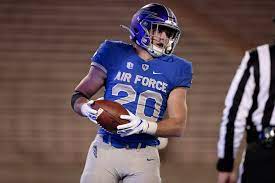 The Air Force Falcons are averaging over 500 yards a game rushing in their first two games. That’s by far leading the country, with Minnesota second, at around 300 yards. Air Force racked up 435 yards on the ground in last Saturday’s win over Colorado. The last time CU gave up that many rushing yards in a game was probably back in the mid-80s, against those Oklahoma and Nebraska option teams. The attack really starts with fullback Brad Roberts, who had 174 yards on 24 carries last week. Last season against Wyoming, Roberts toted the ball 33 times. Air Force head coach Troy Calhoun says he’d love to spread the ball around at fullback, but the way the game is being played dictates those totals.

“I wouldn’t say it’s intentional, to reduce his (Roberts) number of carries,” said Calhoun. “I do think that there’s some other guys that really can help us at that position, that have earned carries to. Specifically that would be Omar (Fattah) and Emmanuel Michel. I’d like to see where we’d have all three of those guys involved, but things don’t always go according to plan.”

The Falcons are at Wyoming tomorrow (Friday) evening. Kickoff at War Memorial Stadium is set for 6 pm.