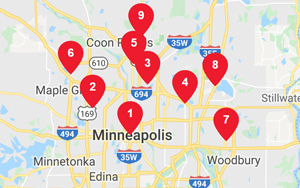 At a press conference Monday morning, Taco John’s President and CEO Jim Creel announced that the Cheyenne-based corporation is opening a satellite office in Minneapolis, Minnesota.

Creel said the decision for the expansion came about from the strategic planning process he instituted more than two years ago.

During that process, the Board of Directors agreed that expansion within the existing footprint had the greatest potential for growth and with more than

200 franchises currently located within a few hours drive of Minneapolis, expansion to the Twin Cities, Creel said, only made sense.

“This is an exciting time for Taco John’s,” Creel said. “We have taken a number of steps over the past two years to lay the foundation for expansion.

And, in order for the expansion to take place, we decided that we needed to have a presence where it was all happening.”

Creel said that some franchisee-facing departments would be centered in Minneapolis but most of the corporation would continue to be headquartered in Cheyenne.

“Concurrently, it makes good business sense for departments that provide direct franchisee support to be located where the majority of the franchisees and future franchisees are located,” he said.

Creel said recent successes at the corporation heightened the opportunity for expansion mentioning the chain’s new menu and the launch of the new prototype that’s being rolled out across the country.

“We wouldn’t have been able to expand had we not put together back to back outstanding years,” he said. “I have been with Taco John’s for 20 years now and I haven’t seen excitement like this in the franchisee community.

Creel said the impact to the Cheyenne headquarters would be minimal and only in the short-term. He said based on the strength of company, he expected expansion in the Cheyenne office would occur too.