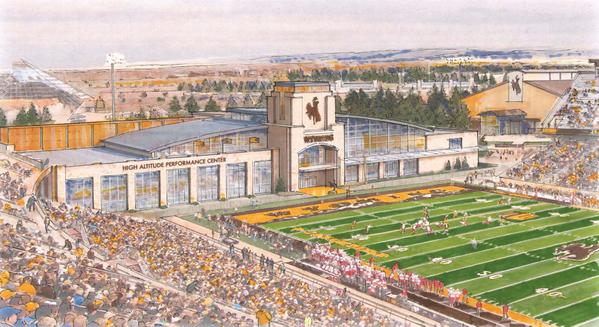 In addition, UW announced a $3 million leadership gift from Marian Rochelle to launch the project. The gift will be doubled to $6 million by the State of Wyoming. Marian and her late husband Curt were the lead contributors to the Rochelle Athletics Center in 1998.

The High Altitude Performance Center will be funded by a $24 million private support campaign and a $20 million State of Wyoming matching program.

“A successful athletics program generates excitement,” says Governor Matt Mead. “This leads to better student recruitment, better alumni support, and stronger schools. I recommended $20 million in matching funds for the expansion and renovation of the Rochelle Athletics Center for these reasons. I thank Marian H. Rochelle for this generous gift and her continued support of the University of Wyoming.”

This remarkable public-private partnership will expand the current 48,000-square-foot Rochelle Athletics Center into a 126,000-square-foot premier collegiate athletics complex, solidifying Wyoming’s reputation as a state committed to excellence—producing student-athletes who succeed in the classroom, compete at the highest level on the field, and define a lasting legacy for this great state.

“The expansion of the Rochelle Athletics Center to include the High Altitude Performance Center will assist our student-athletes to be the best they can be,” says April Brimmer Kunz, daughter of Marian Rochelle and UW Foundation Board of Directors vice chair. “Our family’s donation is targeted to help student-athletes receive a meaningful degree when they graduate from the University of Wyoming.”

The expansion will create a stunning presence 50 feet from the north end of the War Memorial Stadium playing field. It will incorporate architectural styling inspired by UW’s historic sandstone buildings.

“It is fitting that the lead gift to this important project is being made by Marian Rochelle,” says Cowboy Football Head Coach Craig Bohl. “Her unwavering commitment is a testament to Marian’s recognition of the ongoing needs of our student-athletes. Marian’s extraordinary philanthropy continues to shape the course of Cowboy Athletics and Wyoming’s university. It is a redefining moment for Cowboy football.”

Enhancing the overall improvements, the Veteran’s Memorial will be relocated to the south end of the stadium, creating an elegant plaza below a new 80-foot-wide video board. Ribbon messaging boards added to the east and west stands and a new sound system will enhance the spectator experience for all UW football fans.

While the central focus of the expansion is to provide the football program with the tools it needs to win Mountain West Conference championships, the facility will also benefit all UW student-athletes.

When this initiative is complete, the facility will become the premier athletics center in the Mountain West Conference, featuring new or expanded spaces focused on academic success, nutrition, strength and conditioning, sports medicine and rehabilitation, and recovery facilities for all of Wyoming’s more than 400 student-athletes.

“The Athletics department and university have had a wonderful long-term partnership with the Rochelle family,” says UW Athletics Director Tom Burman. “It is exciting that Marian is investing in this transformational project. When this facility is complete, the new High Altitude Performance Center will become the premier athletic center in the Mountain West Conference. We are so appreciative of Marian and April. It is simply amazing the impact that they have had on UW through the years.”

The new High Altitude Performance Center will ensure that UW capitalizes on its greatest competitive advantage—physical training for young men and women at 7,220 feet. The thin air of the Rocky Mountains provides an opportunity for Cowboys and Cowgirls to gain unique conditioning that cannot be achieved at lower elevations.

The first floor will maximize efficiency and create a welcoming environment with the Sports Medicine and Rehabilitation Center centrally located so it can be accessed by all student-athletes.

The first floor will also have the Football Strength and Performance Center, a tiered War Room for full team meetings and other campus uses, and an expanded football locker room, as well as a Heritage Hall honoring the history and traditions of Cowboy Football.

The existing football coaches’ office suite and position meeting rooms on the second floor will be reconfigured and enlarged to increase efficiencies for the student-athletes and the coaches within their busy daily schedules.

The second floor will also focus on key programmatic elements for the success of all UW’s student-athletes. The Training Table will integrate technology for customizing each meal to meet the individual nutritional needs of every individual student-athlete. The arrangement of the space will allow for team meals, as well as more casual and intimate dining.

The Academic Center will also serve student-athletes in a state-of-the-art learning environment for all sports to take advantage of staff support and tutoring. The space will support greater accessibility for every student-athlete.

“The University of Wyoming, in partnership with transformational private supporters like Marian Rochelle and State of Wyoming leaders guided by Governor Mead and so many key members of the Wyoming Legislature, is making a statement that the commitment to excellence in our state knows no bounds,” says Ben Blalock, UW Foundation president.

One of the most widely used facilities in UW Athletics, the Curtis and Marian Rochelle Athletics Center opened its doors in 2001 and serves the academic and athletic needs of all 17 Wyoming sports. The $9.4 million facility was entirely paid for by private donations from 167 different donors, including a historic $4.2 million gift from the Rochelles, which was the largest donation in school history at the time.

The Rochelles followed up in 2001 with a gift of $1.5 million for a university beautification fund, which has gone toward landscaping and art installations across campus. The Rochelles also established the Curtis and Marian Rochelle Chair in Animal Science in the College of Agriculture and Natural Resources with a gift of $1.1 million.

Then, in 2006, Marian Rochelle honored her late husband, attorney William Brimmer, with a $1 million gift to UW to create the William N. Brimmer Legal Education Center in the College of Law, a state-of-the-art multi-dimensional space that can be configured as a high-tech courtroom, a classroom, or a lecture hall to better prepare students for practice in modern courtrooms and also to host actual trial proceedings and other events. In 2012, Marian H. Rochelle donated more than $12 million for the Marian H. Rochelle Gateway Center.

“Marian H. Rochelle is one of UW’s greatest supporters and friends,” says UW President Dick McGinity. “She and her husband Curt’s initial gift for the Rochelle Athletics Center changed the face of the university and its programs. That gift made the center possible, and this most recent one will make it better. Marian’s generosity has touched many places on campus, but the most important impact her generosity has had is on students. She shares the university’s vision of giving students every opportunity to become successful, and with her continued support, they will be able to accomplish just that.”

The expansion of the RAC into a state-of-the-art high-altitude performance facility will enable the University of Wyoming to become a leader in the development of student-athletes both academically and athletically.