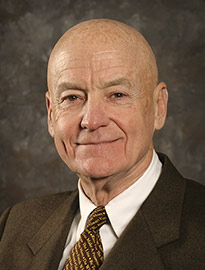 University of Wyoming President Dick McGinity says he will return to a faculty position when his contract expires next year.

UW Board of Trustees President Dave Palmerlee says planning for a new president search will begin in the coming weeks.

Palmerlee says the intention is to conduct a search in which the finalists are publicly identified.

McGinity became UW’s 25th president Jan. 17, 2014. He replaced Bob Sternberg who resigned after less than five months on the job.

The UW trustees tried to hold a secret search in hiring Sternberg. The threat of a lawsuit by media eventually forced the trustees to release the names of the finalists.

Much of McGinity’s administration has involved filling administrative jobs that were left vacant as a result of Sternberg’s short tenure.